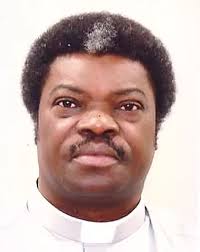 Another day to celebrate a prodigious of ours. Before I do that, let me tell you a story.

Earlier this year, I was sitting quietly in my holy village’s Roman Catholic Church (St. Theresa Parish) Abor listening to the homily of this great man of God. He sounded well read and his message was very enlightening. I must confess, I had admiration for the man for his in-depth knowledge of the word of God. Then, the moment came and he introduced himself as the Vice Rector of St. Peter’s Regional Major Seminary Pedu, Cape Coast coupled with his acknowledgment and commendation for his then headmaster of Spaco Mr. Gadzekpo who he spotted among the congregants.  In honesty, my head was swollen and my respect for the man of God, soared higher due to the fact that he was coming from my alma mater. He further praised Spaco for its contribution of Catholic Priests in the Keta Akatsi Diocese and encouraged the young men to enroll in the minor seminary in a vocation drive.

Rev Fr. Dr. EMMANUEL RICHARD MAWUSI is the Vice Rector for the St. Peter’s Regional Major Seminary Pedu, Cape Coast: The “school of Jesus”, where young men are not only trained in discipleship but are also configured into the image of Christ Jesus Our Lord and Saviour.​ In short Catholic Priests.

Fr. Emmanuel had his elementary education at Anfoeta Tsebi RC/LA Primary School and Kpedze Roman Catholic Middle School. He had his A`Level education at St. Paul`s Secondary School, Denu from 1982 – 1984.

In 1984 he gained admission to St. Peter`s Regional Seminary, Pedu, where he did his Philosophical and Theological Studies. After a successful completion of his studies with Diploma in Theology, he was ordained a Diocesan Priest for the Catholic Diocese of Ho on the 21st July, 1990.

In 2000, he was sent for further studies at the University of Vienna, Austria and in 2004, he was awarded Master`s Degree in Theology. In 2009 he was subsequently awarded Doctor of Theology Degree (Mit Auszeichnung).

On his return after studies, he was appointed Lecturer/Formator in Dogmatic Theology at St. Peter`s Regional Seminary in 2010. In the Seminary, Fr. Mawusi teaches Courses like Christology, Fundamental Theology, Ecclesiology, Sacramental Theology and Missiology. He is currently the Vice Rector of the Seminary.

We seek grace and strength on our noble conqueror who is raising the name of our Mother School and may he continue to groom fine gentlemen after the heart of Jesus.