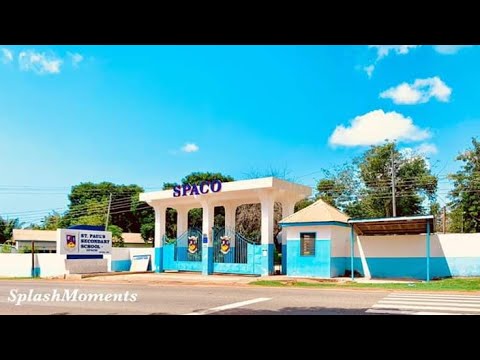 The National Executive Committee, NEC of the old students’ association of St. Paul’s Secondary and Minor Seminary School, SPACO, Denu in the Volta Region inaugurates its Project Implementation Committee, PIC, a sub-committee of the NEC for the Schools’ housing renovation project. This unique ceremony was held via Zoom virtual meeting and was streamed live on the association’s Facebook accounts.

Speaking at the inauguration, the national president of the old students’ association, Conq. Joshua Sosu noted that although the idea has been a general observation that the infrastructure that houses students on the campus was dilapidated and needed a facelift. The idea of the renovation was however, the brainchild of the previous national leadership and was dubbed; Operation Hatsukope Alpha 1 (OHA1). The then executives created a lot of structures including the formation of a bid committee and house level leadership to oversee specific aspect of the renovation, he recounted.

The new leadership upon assumption of office, identified some challenges from the reports of OHA1 with many recommendations. One major recommendation that the report made, was the establishment of the Project Implementation Committee, PIC, to oversee the fundraising and execution of the project, Conq. Sosu asserted.

He continued to say that a thorough evaluation and scrutiny, amidst interest from several individuals was done to select and draw from numerous persons with expertise in banking, finance, project management, engineering, information technology etc. to constitute the PIC.

“There are elaborate structures in place for accountability and transparency” the president assured.

The headmaster of the school, Mr. Augustine Amedeker in his recorded speech, mentioned during the inauguration that, the current students’ population amounting to about 1,682 is putting much pressure on the existing facilities and it is also affecting effective teaching and learning in the school although successive governments and past students are doing a lot.

He enumerated some of the major infrastructural challenges affecting the school and it includes;

Mr. Amedeker thanked the old students and executives for the some of the developmental projects they have done in the school and among them is;

During the inauguration, a 15 minutes video of the poor and dilapidated nature of infrastructure in the school was played to participants. Commenting on the video, the national vice president of the association, Conq. Robert Worname, who also served as the moderator of the event asked fellow Conquerors to come on board to ‘cloth the nakedness’ and bring back the glorious ‘beauty’ of their mother (Spaco) who nurtured and taught them to be responsible citizens. He also appealed to his colleagues to support the national executives to bring back excellent academic performance to the school.

The board chairman of the governing council of the school, Prof. Conq. .Augustine Ocloo lamented about the poor nature and neglect the school is going through and called for an operation “Occupy Spaco” which involves setting up an endowment fund which would be a sustainable funding that would expedite the human and physical resources’ demand the school requires.

The Charmian of the PIC, Conq. William Hwanompe, an Economist/Entrepreneur acknowledged that, though the task is a tedious and herculean one, he and his formidable team will put in every effort to see the project come to fruition.

Touching on the commitment of the PIC members and the entire old students, the chairperson of the inauguration Conq. Roderick Ocloo called on everyone to come on board to support the objective of the project. He caution against casting insinuations and finding faults with people for the problems of the school.

“The deterioration of St Paul’s started long ago and so, we cannot be blaming anyone for it. We just want to come in as a body interested in restoring our alma mater to an acceptable level” Conq. Roderick Ocloo said.

He further called on the PTA and other stakeholders to all play their roles. He also requested lot of sacrifice from the PIC members.

The PIC is inviting donations and pledges from all and not limited to the past students and stakeholders alone but corporate, government and all other institutions for the implementation of the renovation project.