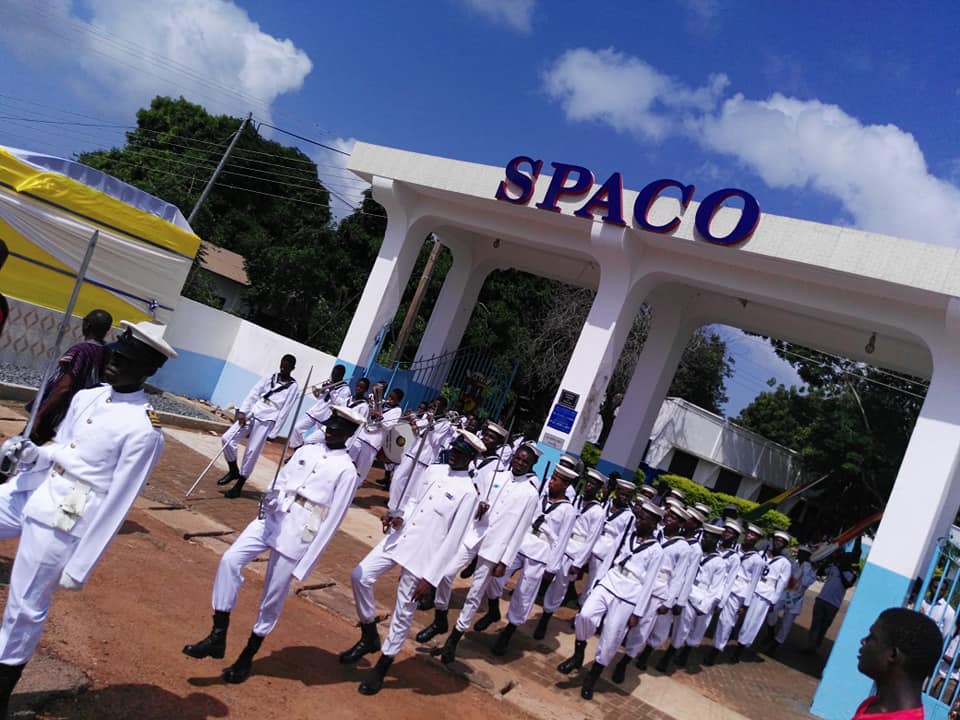 Introduction
The Spaco 60th Anniversary Celebration came at a time of a near academic and social decline in our School. With the realization of the declining academic, infrastructural and social conditions on campus, the Anniversary celebration served as the platform for mobilization of human and material resources for the rebuilding of our school. The guiding vision therefore, was to transform Spaco into a first-class standard secondary education institution in Ghana and comparable to similar educational institutions at the international level.

Expectations and Operations
The key expectations were to renovate all dilapidated academic and dormitory structures and facilities into functional and convenient environment for effective teaching and learning in Spaco. Thus, the anniversary projects included the renovation of two (2) classroom and the four (4) dormitory blocks.

By the rate of cash flow during the period, none of the blocks could be rehabilitated. Rather, the Champion Avenue was reconstructed, the school fence wall plastered and painted as face-lifting projects before the Grand Durbar.

Fortunately, the planned events as part of the celebration were held with good success during the period (January to December, 2018). The events included the following:
a. the National Launch of the Anniversary held on Thursday 25th January 2018 at the British Council Hall, Accra.
b. Anniversary Health Walk and Anniversary Cloth Launch held on 30th June 2018 at the 37 Military Hospital Mess.
c. Spaco 60th Anniversary Sposa Homecoming 2018, Anniversary Games and Medical Outreach conducted for the residents of Hatsukope and its environs which took place on Campus on 27thOctober, 2018.
d. Career Counselling, Professional Development Seminar for the students and Stakeholders Forum were held on 5th and 6th of December 2018.
e. Grand Durbar of past students, the current students and staff, the chiefs and people of Aflao Traditional Area held on the 8th of December, 2018.
The ancillary activities undertaken were the production, printing and sale of Anniversary paraphernalia including cloth and T-shirts.

Financial Position
Funding for the activities and events were from contributions and levies paid by individual members of SPOSA and the Year Groups respectively. We had some corporate organizations who gave us some amount as is shown in the accounts. We also had some members who financed our activities at zero interest. The Sposa National Accounts at the Agriculture Development Bank, Cedi House Branch Accra, was the main source of transactions. We started with an opening balance of six thousand, five hundred and eighty -six Ghana Cedis, eleven pesewas (Gh¢6,586.11) on the account when the 60th Anniversary transactions began. We mobilised a total of two hundred and forty-three thousand and ninety-eight Ghana Cedis, fifty-seven pesewas (Gh¢243,098.57). We expended One hundred and ninety-seven thousand, six hundred and thirty-one Ghana Cedis, fifty pesewas (Gh¢197,631.50) excluding cost and sales for Cloth & T-Shirt. We currently hold One hundred and one thousand, six hundred and nineteen Ghana cedis, ninety-three pesewas Gh¢101,619.93 at ADB account and a petty cash of eighteen thousand four hundred and seventy-seven Ghana cedis (Gh¢ 18,477) with a net income surplus of Gh¢68,385.82.

We hereby acknowledge all those who financed our activities, especially the Cloth and T-Shirts. While we express our profound appreciation for their support, we assure them that all the funds received from them will be settled accordingly. Equally, we hereby mention that some individual members remain indebted to the CPC (Ref. page 28) in relation to sales made on Cloth and T–shirts. They are prevailed upon to settle same immediately.
We also wish to appeal to the Year Groups which still owe the levy to endeavor and settle the obligation.
The Way Forward into The Future

We wish to state that we have achieved a very reasonable success on the purpose-level evaluation. Indeed, we would agree that the activities of the Anniversary generated and are sustaining the needed enthusiasm among members of Sposa, the students and management of the school for a brighter future.
However, there are some aspects of the anniversary goals and objectives which could not be implemented due to institutional and logistical constraints. The remedy for this situation was considered at the Stakeholders Forum. The Forum was attended by participants including the Bishop of Keta-Akatsi Diocese Rt. Rev. Gabriel Kumordjie and representative of the Parent–Teacher Association (PTA), the Traditional Authority, Staff, students and SPOSA.
The Forum decided that the unexecuted goals and objective should be reviewed for development and implementation of Spaco Transformation Agenda I – 2019-2024, (a five-year roll-on Strategic Plan). The Implementation of the Agenda will be funded by a pool of resources from the stakeholders, namely the Church, the Community, the PTA, SPOSA and the general public to be known as SPACO Infrastructure Development and Performance Improvement Fund, will be established. A framework for the establishment and management of fund was expected to be presented to the Forum for adoption in May 2019. The Torch is still on, let us keep the fire for a better future of our school.

The CPC and indeed, SPOSA acknowledge the contributions of Grand Conquerors, all Year Groups and Individual Sponsors. We also express special acknowledgement to the Bishop, the Church, the members of CPC and the Chairmen and Secretaries of all Sub Committees, Headmaster and Staff of Spaco and all who in diverse ways ensured success of the anniversary celebration.

The assignment entrusted to the CPC could not have been effectively executed for a successful celebration without the involvement of Dr. Yegbe’s immeasurable support apart from being the Chairman of the Finance Committee. We are most thankful to GC Frank Jones Abban and Roderick Ocloo who provided financial advisory services and supported the preparation of the Anniversary Accounts.

And to everyone, we say thank you. You may look out for the detail Anniversary Activity Report coming soon. Please, read on.