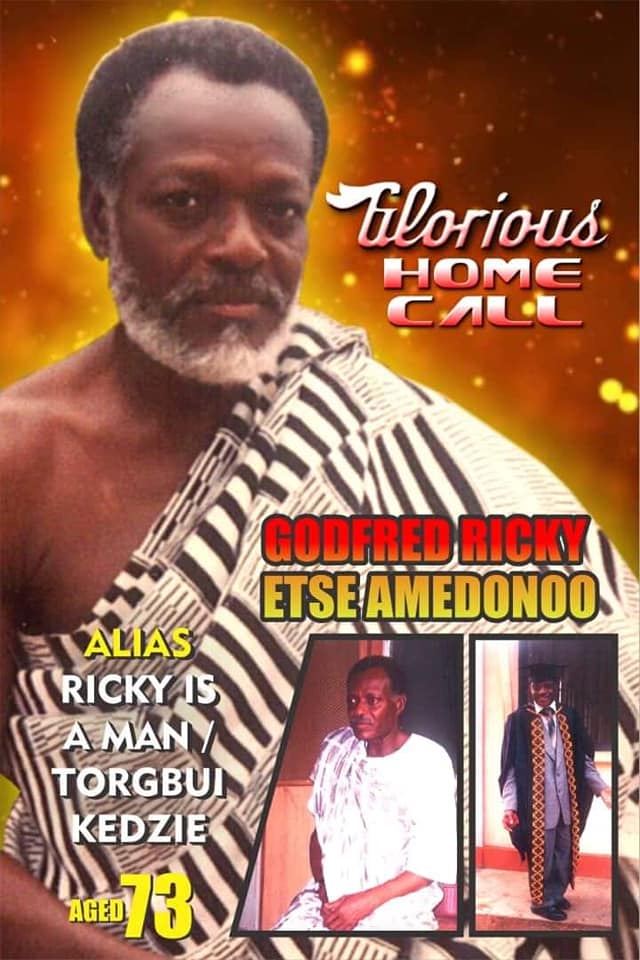 Sir Ricky was one of the long-serving staffs at the great Spaco. He joined the Spaco teaching staff in 1993 till 2007 when he retired from active service. Prior to joining Spaco, he was an Economics tutor at Sogakope Secondary School.

The late Mr. Amedonoo’s final funeral rites was held over the weekend and it was an emotional moment for many of his students especially Foga Nukunu who has expressed the impact Mr Ricky had made on his General Arts B Class (1998 batch) and therefore called on the group to set up Godfred Ricky Etse Amedonoo Prize for best Economics Student in Spaco to immortalize the memory of the Economics’ teacher.

The late Sir Ricky has carved a niche for himself as a punctual, professional and jovial teacher in Spaco. His teaching methods were unique and has won the admiration of many of his students.

Foga Nunuku has taken to his social media page to eulogize one of the fine Economics’ masters Spaco had.

Below is Foga’s full tribute:

Going to the burial service of a person who imparted your life may be troubling….but I have decided to use my time at the funeral of a great teacher of mine to put together this tribute.In 1996, a group of young boys were privileged to be admitted to a prestigious secondary school called St Paul’s Secondary School at Hatsukorpe.Only General Arts B Class in SPACO at the time were allowed to offer Economics as a subject. In fact, it was compulsory for all in General Arts B to read Economics.My twin brother and I were so fortunate to be part of those admitted in January 1996 into General Arts B Class.By some divine grace, we were assigned an Economics Tutor who later became a father figure and the most valuable teacher ever in the lives of General Arts B students. He was also teaching Form Two General Arts B Class.As form one students, we were comp.

Starting from the Nature and Scope of Economics, it was really the definition of Economics by Adams Smith that we liked….”An inquiry into the nature and causes of the wealth of nations”….only for our master to say Lionel Robbins’ definition of Economics was suitable for examination…”Economics is a science which studies human behaviour as a relationship between ends and scarce means which have alternative use”.I can vividly recollect how he explained the above definition to the class in 1996.He made it clear to us that Economics may not be Biology or Physics or Chemistry yet it follows all scientific methods of observation, hypothesis, predictions and experimentation ….He went on to explain that human wants or ends are unlimited but the resources or means to satisfy these numerous wants are limited in support.Once all you want cannot be satisfied because of the scarcity resources, it becomes imperative to select pressing things you deem important and abandon the rest. Making Choice is to be done in such a way that things needed are arranged in order of importance…. A, B, C & D. I remember he named it Scale of Preference. He went further to explain to us that choosing A and B and leaving C and B was to tell us some things that we wanted can be forgone or done without.He named it Opportunity Cost or Real Cost or Forgone Alternatives.We enjoyed the first three classes of this great teacher and throughout , we popularized his style of teaching to our mates in Science and Business classes.By the time we moved to the Economic System, Production, The Theory of Consumer Behaviour, Population, Demand , Supply , Market Structures, Public Finance, National Income, International Trade, Money etc. etc., we were fully convinced that his subject would record the highest number of As in the 1998 SSSCE.In 1998 SSSCE, Economics recorded several As with a record percentage pass.

This was a man who would look at you and rename you and if you joke, that name would follow even after school.He renamed Afanvi David , now Rev. Afanvi David as Shorty Kapuepue. Just because of the height of Rev.A hairy students in the class were called Gbefĩ ( bush mouse).One incredible incident occurred in Form Three (1998). We just commenced lessons on Money. One enthusiastic student wanted to know from our Economics teacher if Cheque can be referred to as Money. The student asked ” is a cheque a money”? This drew a huge laughter from the teacher and students in the class. The enthusiastic student carried the name IS A CHEQUE A MONEY? These were just memorable periods in our lives.In personal relations, he related with every student well. His house was our house. That mango three in his bungalow was our playground.He failed to convince my twin brother and I to switch to Elective Mathematics. He said he would like us to read Economics at the University level and asked us to add Mathematics to our Elective Subjects.Unfortunately, it was French or Elective Mathematics. We went for French Language.

I am sorry to express our regrets.It is in deed regrettable that all of us in General Arts B failed to honour this excellent tutor before he joined the world beyond.We all agree today that he was the best in our era. What can we do to immortalize his name?I wish to express my profound gratitude to all old students from Slogans Co , Three Town and Spaco who came to support the family of our dear teacher.