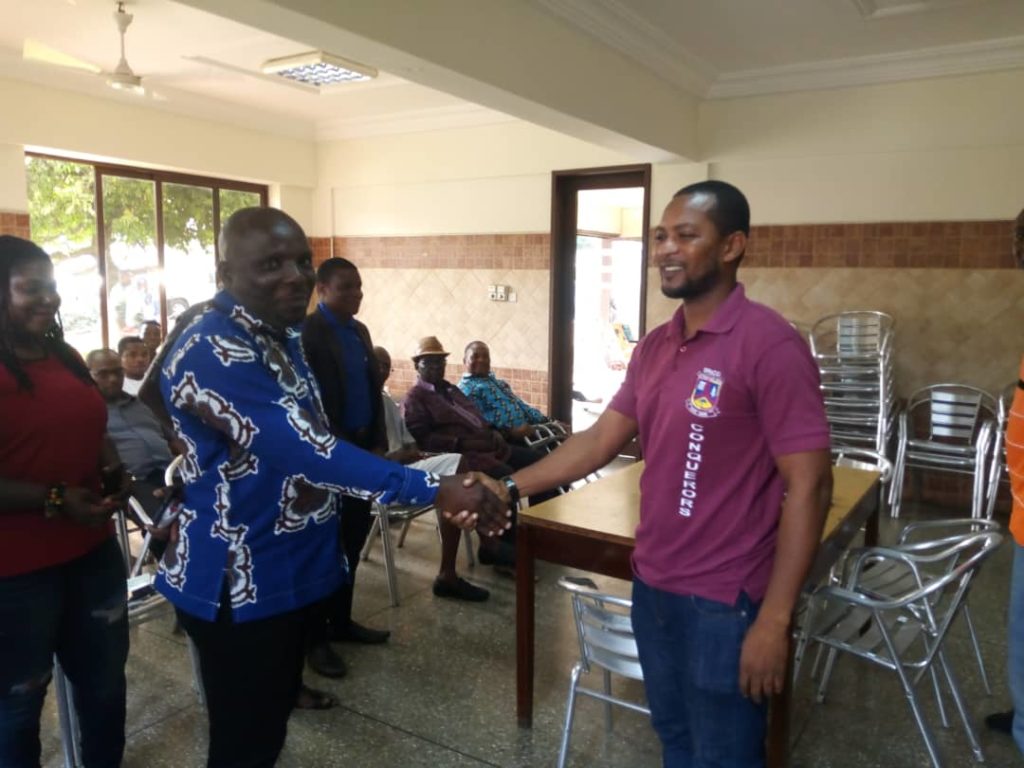 SPEECH BY THE OUTGOING PRESIDENT OF ST PAUL OLD STUDENTS ASSOCIATION ON THE 9TH OF FEBRUARY 2020 AT THE CHRIST THE KING CHURCH, ST ANTHONY’S HALL

The Chairman of the Electoral Committee, Incoming President, members of the executive committee, Grand conquerors and members of the Sposa fraternity, representatives of Spaco, ladies and gentlemen.

9 years ago through the ballot box I was made President of Sposa. I accepted the responsibility to serve Sposa as a new job, a new mission and an adventure. Together with a young team of high-spirited energetic executive members, we took the dare to make Spaco and Sposa great.

Today we remember one of ours, the Assistant Organizing Secretary who passed on to eternity just within our first term of office. May we observe a minute of silence for the Late Faustina Dotse. (May her soul rest in peace, Amen)

We took over power with a vision as follows

Our first initiative was to generate excitement around the Sposa brand and get Old students on-boarded and interested in the affairs of Spaco. We embarked on the formation of year groups as a critical path we needed to cross to the goal. Over the years we have seen year groups organize and mobilize themselves from mere funeral and party attending friends into well-structured groups with their own leadership. Currently we have over 20 year groups and the great consolidated group – THE EMERALDS.

The success of most of our activities will be marked to the existence of these groups – Worth the mention, the Emeralds have been my backbone support group in the background

Mr. Chairman, our source of financing mainly came from year group contributions and donations from benevolent individuals who dreamed together with us. On some occasions we had to seek sponsorship from corporate bodies to support some of our initiatives.

Our key challenge here has been defining a sustainable way of mobilizing deposits continually for our projects from member’s/year groups without the pain of having to task members each time we had a project to deliver. The challenge is thus passed onto you Mr. President and we will continue to support you achieve that goal.

Mr. Chairman, belief in Spaco and willingness to contribute to the growth Agenda is still an issue. Members practically had to be dragged to meetings or participate in programs. Even with a database from which over 200 members received multiple text messages to attend meetings, we still achieved an average presence of 25 members per meeting. Whiles we are convinced that we have come far growing membership and involvement, a better structured way of meeting attendance will however be key in going forward and I read the Incoming President’s proposals on some great initiatives in that direction.

Past Experience with Leadership of Spaco – Only few members of staff were committed and took our investment in time and cash seriously. Projects handed to Old students to drive were delivered poorly

and in some instances, we had to invest additional resources to complete the jobs properly. Recently, we have seen an increase in participation and responsibility shared by some staff, however there is still a lot more to be done.

Other donations from year groups and members

I am also aware of the immense individual contributions by members; some who have asked to keep their names out of the books.

Mr. Chairman, we finally saw the formation and inauguration of the Board come to life after years of struggle and we are happy to have the Board Chair as our own among four other old students.

Mr. President, I humbly entreat you to revamp the Mentorship Program we started together very well but fell off due to logistical issues

The replacement of the Vandalized Vehicle belonging to a tutor; Mr. Gadzekpo. This happened during the demonstration that saw the loss of life of a student through a gunshot on campus.

Project OHA1 – the refurbishment of houses of residence.

The Marriage between Sposa and St Catherine’s Old Students Association

During the Anniversary celebration, the school incurred cost on behalf of the Old Students Association unduly. Some quantities of cloth and T-shirt to be sold by the school were issued as gratis to some dignitaries at the Regional and District Education offices and the Church and this led to unwanted back and forth. I hereby for the first and last time as president, veto that the debt be cancelled and written off in our books.

I have been harsh and I have been soft, I have spoken to people without recourse to who was in front of me or was on the other side of the line. I had to be President of no other institution than SPACO. I have learnt a lot from leading Sposa and I am forever grateful for the opportunity. For those I offended in the line of duty, can we be friends again? Now that I am not President. For those who stood by me through it all, I present to you Mr. Joshua Sosu, our new President. Stand by him as well

Firstly, to God almighty who gave us strength and wisdom, patience and understanding to run the affairs of Sposa over the last decade

Also to the team I started with, Voice kokoroko, Prince Amuzu, Diana Sogbey, Jerome Katsekpor, Abraham Honest. The bond and support was great and that saw me through the second term with a team of four. Special thanks to Dan Ameho my vice President and senior for your great works, Mawuli Kokoroko my secretary and Bruno Glakpe my Organizing Secretary.

To my Big brother, Peter Adotey for believing in me and spotting me for the role of Presidency. The support went with me all through the nine years and I keep talking to you on personal issues as well.

GC Frank Abban. Thank you for superior show of maturity and leadership. You called me often when you noticed I was on the verge of giving up. You still believed I had a role to play and pushed me like your younger brother. You took up the role of Finance Secretary in quite and I noticed it all. You own part of my successes.

Victor Way Kuvodu. We had ‘the dream’ beyond every challenge that we faced. You led the Anniversary celebration from launch to a successful implementation with great conviction even when you were taken ill and couldn’t walk. God bless you.

To Dr. Capt. Yegbe, I can’t salute you any better. You are the main man behind the financial support that went into the Anniversary celebration. We recorded in excess of target leading to the additional projects we carried out post Anniversary.

The Senate. for all the ideas and support, Thank you.

Friends and Family, I want to say a big thanks to you all.

This is where I stop. God bless Spaco and God bless us all.