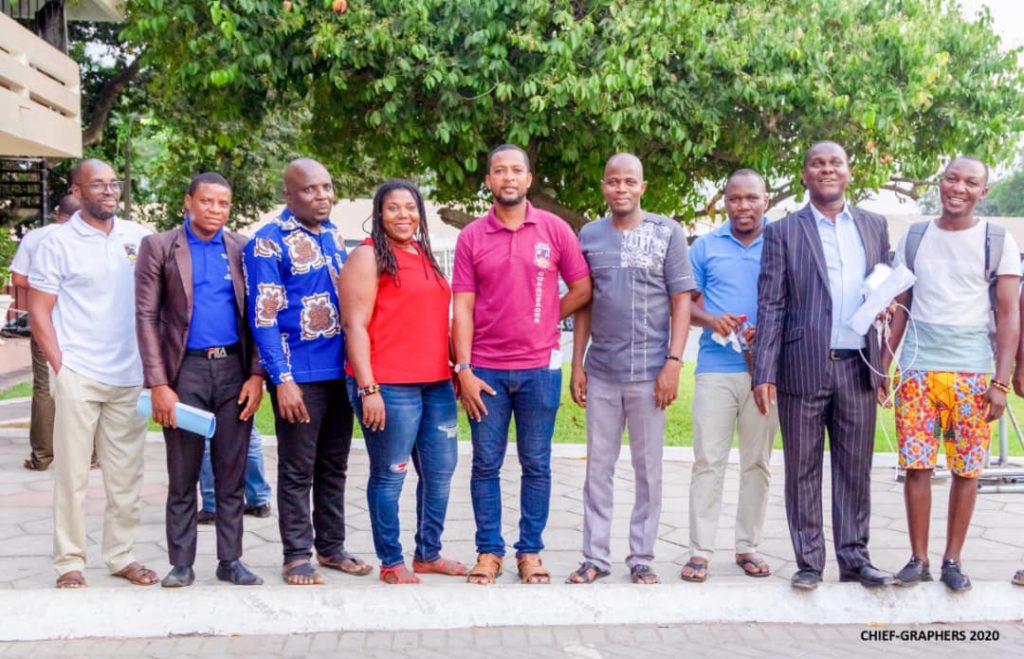 iv
ACKNOWLEDGEMENT
To a certain extent, this report is an outcome of cooperation. Several people have cooperated
in many ways during the past few months by providing support, encouragement, guidance, and advice to prepare this report. It is certainly a pleasure to acknowledge our debt to them. This report grew out of the discussions; we had with respect to SPACO HOUSING RENOVATION PROJECT on a Whatsapp we created dubbed the OHA1 DISCUSSION PLATFORM. Admittedly, many CONQUERORS have contributed greatly to the content of this report. We are thankful to all of them. It was a great pleasure to deal with the diverse views that were espoused by members of the DISCUSSION PLATFORM. In particular, we are immensely grateful to the originators of the renovation idea and the outgone executives. We, however, ask that all conquerors show same commitment as we embark on fund mobilization to execute the project.
Thank you

v
EXECUTIVE SUMMARY
The report looks at the issues raised by the discussants on the OHA1 Discussion Platform. The purpose of the discussion was to identify the challenges bedevilling the OHA1 project and proffer strategies for mobilizing funds in aid of St Paul Housing Renovation Project. The challenges identified include the lack of corporate appeal (support), the over reliance on members of SPOSA resulting the lack of commitment from majority of old students, non-functional year groups, poor timing of the project and the exclusion of year groups from fund mobilization efforts. To address the challenges, the following suggestions were made: the project committee should be reconstitute and the mandate of the new committee should be expanded, expand the stakeholder contribution to the project to include appeal to conquerors in the Diaspora and Catholic Organisations, re-launch of project in order to renew the interest of all CONQUERORS in the project, the formation of a project implementation committee to oversee the management of the project, as part of elaborate strategies to rake in funds for the project the adoption of dormitories for a fee should be encouraged. The National Executive Committee adopted as well as modified some of the suggested strategies that emanated from the discussion. In addition, the NEC also made a number of recommendations. The recommendations therefore include the rebranding of the project, bringing other stakeholders on board, the constitution of a Project Implementation Committee (PIC) to take over OHA1. The functions of the PIC shall include among others fundraising and project management, the project objective remains the same, that is to mobilize funds to execute SHRP. However, due to the delay in executing the project as originally scheduled the contract may be varied taking into cognizance the changes that might have taken on the facilities to be renovated. Finally, the Project Implementation Committee will employ very elaborate strategies to rake in funds for the execution of the SHRP.

1
FOREWORD
After providing memorable services to students for many years, the boarding facilities in our beloved alma mater, St. Paul’s Senior High School have deteriorated to the extent that they pose a threat to the lives that currently inhabit them, therefore, when the erstwhile executives led by Conqueror Sesi Dzakpasu commenced various processes to renovate the four houses the news was received with great excitement. Formal processes of award contracts in the Ghana were initiated.
A Bid Committee made up of representatives from the four houses (Torgbui Fiti House, Monsignor Apietu House, Joe Nellis House and Rev. Fr. Cafferey House) and two members from the immediate past National Executives Committee (NEC) was formed. While the processes were on-going, a fund-raising appeal dubbed Operation Hatsukorpe Alpha1 (OHA1) led by Conqueror Frank Ayivor was initiated among the four houses. This resulted in the composition of four different committees to oversee the fundraising activities for the various houses.
The formal activities to get the project started coincided with elections and handing over office by the Sesi Dzakpasu led administration. After our election and awaiting assumption of office, we studied activities outlined for the project and realised that funds generated were not enough to execute the project. So, at our maiden National Executive Committee meeting on 29th December, 2019, we observed with grave concern that the fund mobilisation efforts had been largely unsuccessful. Following a lengthy discussion, we concluded that since funds raised were woefully inadequate and coupled to the change in leadership of SPOSA, the project could stall. We raised an internal memo to the Sesi Dzakpasu led administration about the need to

2
halt the processes to enable the new administration examine other strategies to enhance the fund mobilization.
Upon our assumption of office, we set up the OHA1 Discussion WhatsApp, platform which moderated by Conqueror Daniel Amehoe. We used the platform to engage in broader consultation on the mobilization of funds as well as identification of very effective and efficient strategies. Generally, all representatives from the four houses on the OHA1 committee agreed that the fund mobilisation had largely not been successful because the general SPOSA community was apathetic to the call to contribute money in aid of the project. Admittedly, the fund mobilization was moving at a at snail pace. In spite of the seemingly poor responds towards raising fund for the project, it was generally evident that Conquerors were in favour of the initiative of rehabilitating the four houses. However, the issue at stake was how to mobilize funds for the rehabilitation of the house.
In conclusion, it should be noted that the spirit of the OHA1 project is not altered; all that we seek to do is to ensure that the project is executed. To have the project executed means adequate funds are available for the project. The main thrust of our recommendations is the variation in fund mobilization. With you all in the boat, let us together make St Paul’s Secondary School, our alma mater great again. Yes, we can! Yes, St Paul will be great again!
Mia dzo! Mia dzo! Mia dzo kooko, mia dzo

3
IDENTIFIED CHALLENGES:
i. The lack of corporate appeal: Members of OHA1 committee and the leaders of the various houses agreed that appealing to corporate institutions was very important in the fund mobilisation effort. However, it was not clear how this could be done and they did not agree on the body that should champion the appeal. While some are of the view that the NEC should championed it, others thought such an exercise should be the responsibilities of the respective houses. At the end of the day, there was no effort to appeal to corporate organizations.
ii. Lack of commitment from majority of old students: To rake in funds for the execution of the project, all the houses created Whatsapp platforms which were populated by respective house members. However, these house-Whatsapp platforms became fun platforms rather than encouraging members to contribute money towards the project. On such platforms, the onus of the appeal rested on the executives. As much as these platforms were populated with large numbers of old students, the enthusiasm to associate with the project was zero.
iii. Non-functional year groups: It has been acknowledged unanimously that year groups are very important to the implementation of the project. However, only a few year groups are functional and have been contributing to the development projects in St. Paul over the years. Nonetheless, the present fund mobilization exercise has shown that the very active year groups have not supported the project with the vigour they are known for. It was also identified a large number of the year groups not active or do not any form of grouping enhance are unable to support projects of SPOSA.

4
iv. Timing of the project: It was identified that project coming just few months after the 60th Anniversary celebration did not help matters. SPOSA members spent a lot of money during various fund-raising campaigns in aid of celebration and might have been drained of funds hence the lukewarm response towards the new initiative.
v. Emphasis on house membership: The fund mobilization strategy centred on house level contributions rather than year groups’ contribution. Although while members of SPOSA were in school, they were grouped into houses by virtue of technology and as a standard practice old student gel more and congregate in their respective year groups and not on house basis. It is also undeniable that although every student of SPACO belonged to a house either being an occupant of a house or an affiliate, the call for funds in aid of the renovation project will be more embracing if it were directed to the year groups rather. It is generally, accepted that individuals in the same year group easily identify with each other and are more likely to mobilise themselves for achievement of a goal.

5
SUGGESTED STRATEGIES
A number of strategies were proffered by conquerors to address the identified challenges in order to improve upon the fund mobilisation efforts. The following are some of the strategies:
i. Reconstitution of the OHA1committee: The committee should be reconstituted with a strategic purpose of leveraging the expertise of conquerors in fund raising and project management.
ii. Appeal to conquerors in the Diaspora as well as Catholic Organisations: A number of conquerors are in the diaspora and are very passionate about St Paul’s Secondary School. Such individuals should be identified and approached to solicit their support for the project. Such individual also have contacts to foreign organisations that when approached may come to our aid; for example, a grand Conqueror in the diaspora (the Scandinavian countries) has volunteered to solicit funds from Catholic organisations abroad in aid of the project. The effort is laudable and the said conqueror should be approached. The PIC should be able to work out how much each conqueror should contribute to the project.
iii. Re-launch of project: The project should be relaunched so as to make the general SPOSA community and other stakeholders aware of our need. Accordingly, the relaunch should help create awareness about the project and also solicit the support of all stakeholders.
iv. Project Team: All project related committees/subcommittees will be put under one umbrella called Project Implementation Committee. The Project Implementation Committee will be responsible for the continuation of the SPACO House Renovation Project. The Project Implementation Committee will have expanded mandate which

6
will include fund raising and project management. The reconstituted committee will be strategically constituted to leverage the expertise of conquerors in fund raising and project management.
v. Adoption of dormitories: Just as is the case in street naming, we will introduce the adoption of a dormitory or dormitories by an individual or group of individuals. Such dormitory or dormitories will be named after the individual or the group of individuals. The adoption will be based on contribution of a minimum amount to be determined sum by the reconstituted OHA1 committee. The same strategy can be used for the corporate appeal. Such organisations may have the houses branded in their colours.

7
THE WAY FORWARD
In the light of the above strategies the following are the decisions taken by NEC on the way forward after reviewing the outcome of the discussions by the OHA1 Platform: